The projector is typical of the ViewSonic projector in terms of appearance and design. The lens module is located on the right side of the front panel. There is a focus knob for image clarity adjustment on the top panel.

The projector uses LED as the light source, lasting 30,000 hours. The LED light source has no trouble of replacing the lamp.

It has a short-throw of 0.49, which can project a 100-inch screen within 1.06 meters away. The short-throw projector can save more space with the same projection image size. It can project at most 300 inches, bringing clear and bright images.

ViewSonic LS550W supports both horizontal and vertical keystones, making the image adjustment easy and convenient. The sealed optical engine can prevent dust from the structure.

ViewSonic LS550W is equipped with HDMI, USB, LAN, and audio interfaces, which is compatible with common mobile devices, for example, computer, speaker, etc.

However, the projector is poor in terms of wireless connectivity as it has no built-in Wi-Fi and Bluetooth.

ViewSonic LS550W is a good choice for conference use in view of its good image and short throw. The biggest shortcoming of the projector is the poor wireless connectivity. 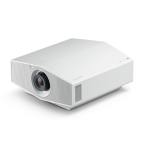 ViewSonic PX703HD Projector – Is It Worth Buying?

How to Fix If ViewSonic Projector Has Lound Noise?